When we bought our 1993 Coleman Cedar it already had the spring over axle
conversion done to it and had really fat tire on it. But we had to use a 4-6"
drop hitch to tow it. 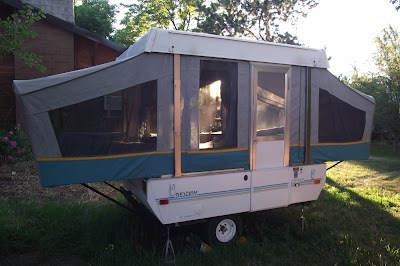 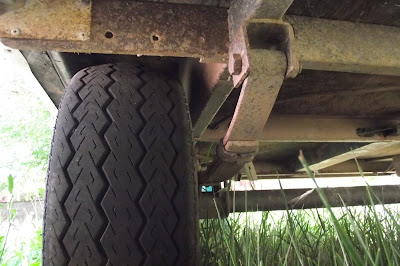 The first thing to do was replace the slipper springs with double eye springs with were
1/2" thicker and had almost twice the weight rating. And while doing this I also cut 2"
lift blocks to put under the springs and added longer U-bolts and longer center pins.
The U-bot and center pin were bought at a local spring shop. 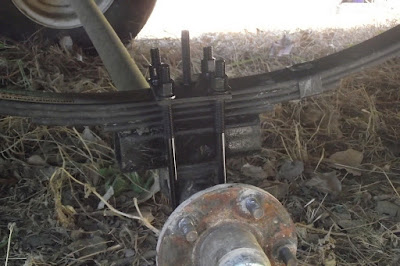 This was not quite enough so I then added a 3" shackle at the rear of the spring.
the shackle came from a local TSC store. 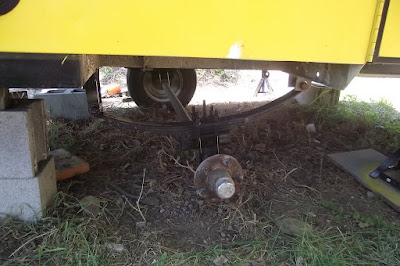 How much of a lift is this , well the original spring over gained 1 1/2" then the 1/2"
thicker springs the 2" blocks and the 3" rear shackle this amount to about 7" of lift
overall but only 5 1/2"for this lift.
Look how the trailer sets now the tires no longer tuck up into the body. 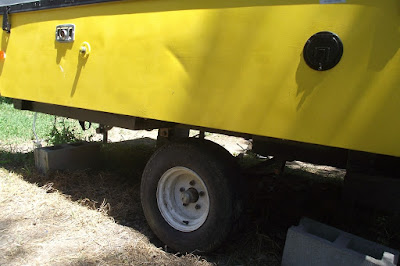 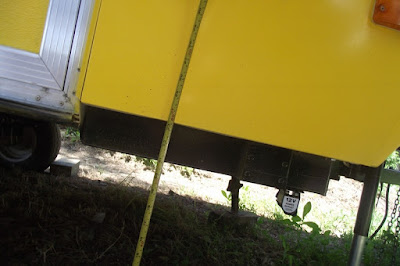 While my trailer was gaining in height so was my Jeep tow vehicle it went from 3" of lift
to 5" so my trailer needed to go up higher too. I got rid of the 3" rear shackle and took
it to a local shop and had the original spring hangers cut off and had a 4" hanger added
to the front and a 4" lift block added to the rear and went back to a shorter 1 1/2"
shackle. At this point I was able to get rid of the shorter fat tires and add 15" tires
which add even more height because I went from a 8" rim to a 15" rim. This has a
added advantage as you are no longer limited to towing at slower speeds because the
tires get to hot and the short fat tires that were on it were not much lower in cost then
the 15" tires. 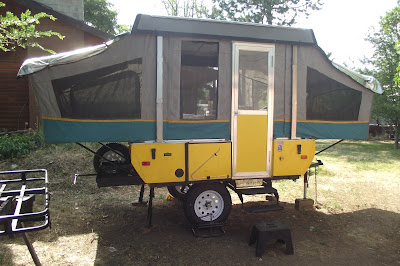 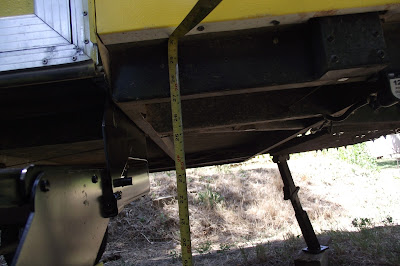 As you can see we had to add a double step I could have gone a 3 step on level
ground but sometimes the trailer is blocked up on the other side and the step ends up
being closer to the ground so we just carry a fold up step with us. 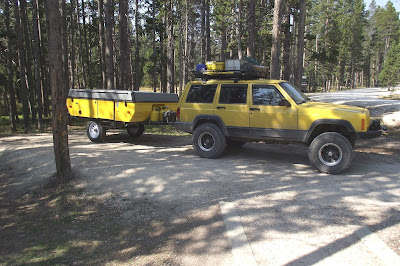 As you can see it matches up nicely to my Jeep the only thing that I would change is I
would make the rear lift block 3" instead of 4" since shackles tend to be 1 1/2" - 2" at
the shortest it is about 1" higher in the back then I wanted. But it tows great no sway
and I can run as fast as 75 mph with no problems .